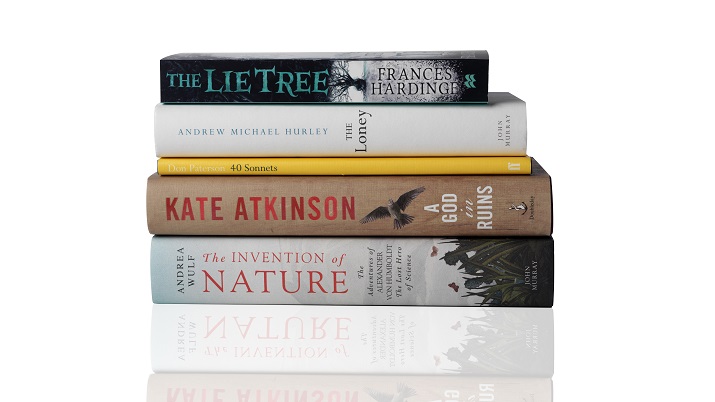 With the culmination of the 2015 Costa Book Awards just days away, the latest odds from bookmakers William Hill have debut novelist, Andrew Michael Hurley, winner of the Costa First Novel Award, as favourite for the Costa Book of the Year with The Loney: a slow-burn gothic horror story the judges called ‘as close to the perfect first novel as you can get’.

In second place is novelist and 1995 Book of the Year winner, Kate Atkinson, with A God in Ruins: the story ofTeddy Todd – would-be poet, RAF bomber pilot, husband and father – as he navigates the perils and progress of the 20th century, winner of the Costa Novel Award at 3-1.

Close behind in third place is historian and writer Andrea Wulf, winner of the Costa Biography Award, for The Invention of Nature: The Adventures of Alexander Von Humboldt, The Lost Hero of Science at 4-1.  Biography won the 2014 Book of the Year with H is for Hawk by Helen Macdonald, her personal account of training a goshawk as a way of dealing with grief following her father’s death.

In joint fourth place at 5-1 are Young Adult fiction and children’s writer Frances Hardinge, winner of the Costa Children’s Book Award for The Lie Tree: a Victorian murder mystery; and Scottish poet, writer and musician Don Paterson for his latest collection, 40 Sonnets, which the judges called ‘a tour de force by a poet at the height of his powers..’

The Costa Book Awards is the only major UK book prize open solely to authors resident in the UK and Ireland. Uniquely, it recognises the most enjoyable books across five categories – First Novel, Novel, Biography, Poetry and Children’s Book – published in the last year.

The five Costa Book Award winners, each of whom will receive £5,000, were selected from 638 entries.  The five books are now eligible for the ultimate prize, the 2015 Costa Book of the Year, worth a further £30,000.

The 2015 Costa Book of the Year winner will be announced at an awards ceremony at Quaglino’s in central London on Tuesday 26th January 2016 by a panel of judges chaired by writer and Ottakar’s founder James Heneage and including comedian and actress Katy Brand, actress and author Jane Asher and broadcaster, writer and actress Janet Ellis.

The winner of the Costa Short Story Award, voted for by the public, will also be announced that evening.

For further press information, to arrange an interview with any of the category winning authors or members of the final judging panel, please contact Amanda Johnson on 07715 922 180 or amanda@amandajohnsonpr.com.

Founded in London by Italian brothers Sergio and Bruno Costa in 1971, our quality coffee was the premium choice for boutique hotels and restaurants across the city. Today we continue to roast the original Mocha Italia recipe in Old Paradise Street, London with our 100% Rainforest Alliance certified coffee remaining at the core of our quality coffee credentials.

Our people are the heart of our business and we employ over 30,000 people, creating around 1,500 jobs this year alone and over 4,500 jobs in the next three years in the UK. We continue to be part of the Sunday Times Best Companies To Work For list, providing skills and training to develop the leaders of the future.

We care about the communities we operate in, which is why we’ve signed up to Keep Britain Tidy’s Litter Prevention Commitment (Sept 2015) with over 650 stores across the UK taking part in the Big Tidy Up event. Our paper cups and lids are 100% recyclable and have an insulated design, eliminating the need for paper sleeves to hold hot drinks.

We’re also committed to tackling the UK’s literacy challenge, continuing our partnership of Save the Children’s Born to Read initiative that aims to ensure that children aged 11 leave primary school with the necessary reading skills to continue to learn through education.

Looking after coffee growers is extremely important to us, which is why we established The Costa Foundation, a registered charity with the aim to relieve poverty, advance education and the health and environment of coffee-growing communities around the world. So far, The Costa Foundation has funded the building of 53 schools and improved the social and economic welfare of coffee-growing communities.