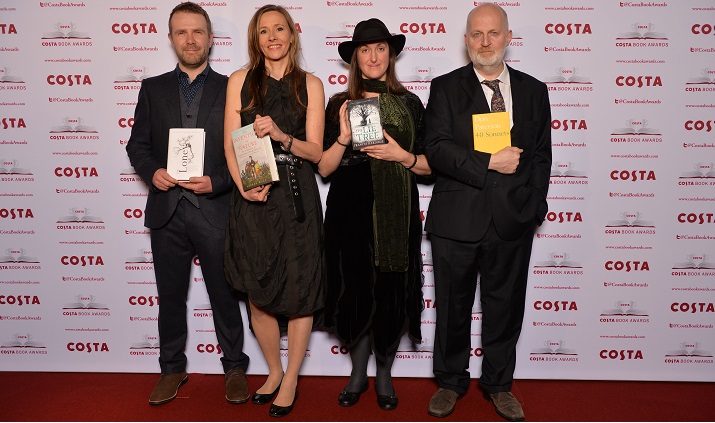 Children’s book The Lie Tree, a Victorian murder mystery by Young Adult fiction and children’sauthor Frances Hardinge, has been named the 2015 Costa Book of the Year.

The announcement was made this evening (Tuesday 26th January) at an awards ceremony held at Quaglino’s in central London.

The Lie Tree (Macmillan Children’s Books) is only the second children’s book to take the overall prize, and the first since Philip Pullman won with The Amber Spyglass in 2001.

Hardinge beat bookmakers’ favourite, debut author Andrew Michael Hurley, for his first novel The Loney, novelist Kate Atkinson for A God in Ruins, Scottish poet Don Paterson for 40 Sonnets, and historian and writer Andrea Wulf for The Invention of Nature: The Adventures of Alexander Von Humboldt, The Lost Hero of Science to win the overall prize and a cheque for £30,000 at the awards ceremony.

The Lie Tree, the author’s seventh novel,tells the story of Faith Sunderly whose family have shipped out from England to a remote island to escape scandal.  When Faith’s father is found dead under mysterious circumstances, she is determined to untangle the truth from the lies.  Searching through his belongings for clues she discovers a strange tree that feeds off whispered lies.  It will take all Faith’s courage to discover the truth behind the curious events on the island of Vane, and what, or who, killed her beloved father.

James Heneage, chair of the final judges, said: “Part horror, part detective, part historical, this is a fantastic story with great central characters and narrative tension.  It’s not only a fabulous children’s book but a book that readers of all ages will love.”

The 2014 Costa Book of the Year was H is for Hawk by writer Helen Macdonald which has sold over 200,000 copies since its publication.

Also announced at the ceremony was the winner of the Costa Short Story Award. Retired headteacher Daniel Murphy from Stirling won the public vote and £3,500 for his story, Rogey.  Two runners-up, writer Erin Soros and writer and part-time gym instructor Annalisa Crawford, received £1,000 and £500 respectively.

Established in 2012, the new Award – run in association with the Costa Book Awards but judged independently of the main five-category system – is unique in that it was judged anonymously (ie without the name of the author being known throughout the process).  It is for a single, previously unpublished short story of up to 4,000 words written in English by an author aged 18 years or over, and is open to both published and unpublished writers.

A shortlist of six stories was selected by a panel of judges – Raffaella Barker, Richard Beard, Fanny Blake, Sarah Franklin and Simon Trewin – and then made available on the Costa Book Awards website for the public to download and vote for their favourite.  Costa Managing Director, Christopher Rogers, announced the winner and runners-up and presented them with their cheques.

For further press information or to request an interview with Frances Hardinge please contact:

Founded in London by Italian brothers Sergio and Bruno Costa in 1971, our quality coffee was the premium choice for boutique hotels and restaurants across the city. Today we continue to roast the original Mocha Italia recipe in Old Paradise Street, London with our 100% Rainforest Alliance certified coffee remaining at the core of our quality coffee credentials.

Our people are the heart of our business and we employ over 30,000 people, creating around 1,500 jobs this year alone and over 4,500 jobs in the next three years in the UK. We continue to be part of the Sunday Times Best Companies To Work For list, providing skills and training to develop the leaders of the future.

We care about the communities we operate in, which is why we’ve signed up to Keep Britain Tidy’s Litter Prevention Commitment (Sept 2015) with over 650 stores across the UK taking part in the Big Tidy Up event. Our paper cups and lids are 100% recyclable and have an insulated design, eliminating the need for paper sleeves to hold hot drinks.

We’re also committed to tackling the UK’s literacy challenge, continuing our partnership of Save the Children’s Born to Read initiative that aims to ensure that children aged 11 leave primary school with the necessary reading skills to continue to learn through education.

Looking after coffee growers is extremely important to us, which is why we established The Costa Foundation, a registered charity with the aim to relieve poverty, advance education and the health and environment of coffee-growing communities around the world. So far, The Costa Foundation has funded the building of 53 schools and improved the social and economic welfare of coffee-growing communities.