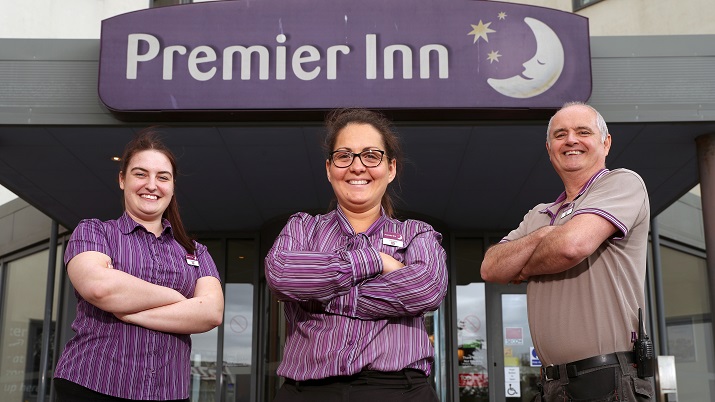 Whitbread reveals it is joining forces with the Ministry of Defence to help veterans back into work – and to make it easier for the spouses and partners of serving personnel find jobs UK-wide.

The Premier Inn owner will be creating over a thousand new jobs at over twenty hotels which are opening across the country over the next year – and is actively looking for veterans and spouses of serving personnel to fill the roles.

Whitbread will be working with the Career Transition Partnership – the Ministry of Defence’s official provider of Armed Forces Resettlement – to help advertise all its roles. Local opportunities to spouses and partners of serving military personnel are also to be offered through the Forces Families Jobs platform.

The scheme is part of Premier Inn’s Change Your Story recruitment strategy – part of its Force For Good corporate social responsibility programme – which actively seeks to recruit people from diverse background.

It is widely recognised that being married to someone serving in the armed forces poses a unique challenge as they often get posted around the country to different bases. This can make it difficult for the accompanying partner to find employment in a new town or city at the same time.

Whitbread, which has over 800 hotels across the country, including at garrison towns such as Catterick, Aldershot, Colchester thinks it could provide the ideal solution for military spouses.

It will offer the chance for flexible working including apprenticeships, which unlike the majority of its competitors are offered on both full, and part-time basis. This is significant as it offers part-time workers contracted for 16 hours per week and upwards the same opportunities for progression and education.

The company also proposes to work closely with spouses and partners who need to relocate to transfer them to the closest available hotel or restaurant with a ‘buddy’ to help make the process run more smoothly.

Simon Jones, Managing Director Premier Inn and Restaurants UK, said: “We are already proud to have lots of veterans, spouses and partners working in our hotels and restaurants across the UK and are delighted to make it even easier for members of the armed forces community to get – and stay – in a job with us”.

Whitbread team members across the UK have welcomed the scheme.

Maintenance Manager Steve Douglas and Duty Manager Natalie Carmon work at Premier Inn Portsmouth Port Solent. The hotel is already a fixture for many members of the armed forces – playing host to guests staying for homecomings, deployments and passing out parades.

Steve spent 23 years in The Royal Navy as an electrical engineer. He has been with Premier Inn 12 years.

Steve, whose career in the Navy saw him travel the world to places as far-flung as Australia, Africa and the Middle East said: “I’m so proud Whitbread is supported the armed forces community. The skills you learn in the Navy are directly transferable to the hospitality industry. I was in the Navy for over twenty years many ways a hotel is just like a ship – it just doesn’t go to sea! I’ve been with Premier Inn for years now and love my job. I hope we get to welcome more members of the armed forces community on board soon”.

Natalie Carmon, 33, is married to Naval Office Neal. Natalie has worked for the hotel for four years – and herself informally transferred from a Premier Inn in Liverpool when Neal was posted with his job.

The mum-of-two said: “I think it is absolutely brilliant Whitbread is supporting the forces and especially partners of serving personnel. It’s hard having to move home, you may have no friends or family in your new base and you don’t know where you’re going to live. Knowing your job can be a constant will be a massive relief for many”.