Replica Sandcastle Hotel washes up on the shores of Skegness 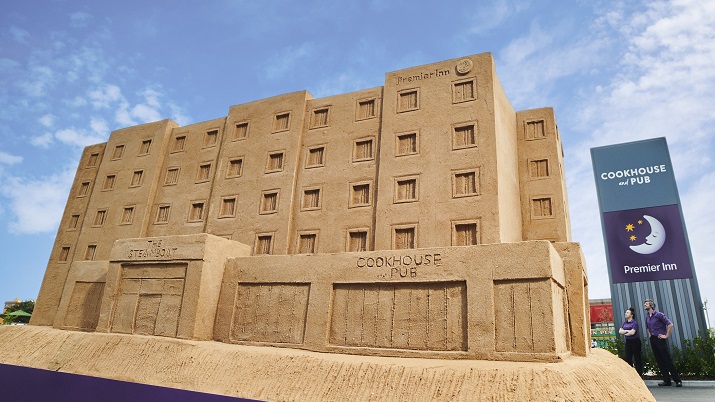 Premier Inn has today celebrated the opening of its milestone 800th hotel in Skegness with a hotel model like no other; a sand creation in honour of the seaside location. Stood at over one metre high and weighing over one tonne the sculpture stands on display as the hotel is officially opened by Matt Warman, MP for Boston and Skegness.

Matt Warman said: “It is great to have Whitbread open the Premier Inn hotel on Skegness’s North Parade, creating 70 year-round jobs for people in and around the town. It has been obvious from the word go that this British business takes its commitment to local communities seriously, with Whitbread working closely with Skegness Job Centre Plus to provide employment opportunities for jobseekers in the area, as well as creating apprenticeships for young people looking to develop their potential.

We have a fantastic tourist industry in Skegness with many visitors keen to visit our fantastic coast. Both the Premier Inn and the Cookhouse & Pub restaurant are already great additions to our busy Grand Parade”.

The newest offering on the shores of Skegness, a first for the seaside location, is within walking distance from the iconic town’s pier, beach and train station. The landmark location also includes key amenities such as luxurious Hypnos beds®and en-suite bathrooms in every room, as well as the delicious all-you-can-eat breakfast buffet Premier Inn is famous for.

Commenting on the opening, Simon Ewins, Managing Director at Premier Inn, said: “Skegness is an iconic seaside destination, and as a British brand, we are truly delighted to mark the opening of our landmark 800th hotel here and play our part in the town’s ongoing success story. With more locations UK-wide than any other hotel company in the UK, our guests are never far from a great night’s sleep”.

Premier Inn is the UK’s top rated hotel chain*. It has more than 76,000 rooms across the UK and Ireland, with prices starting from just £35 a night. Known for its ease and convenience of leisure and business travellers alike, there is something for every guest, with locations available up and down the country.

Premier Inn is one of three concepts from the brand, alongside hub and the recently launched ZIP by Premier Inn.

Premier Inn has 800 hotels across the UK. Book direct and choose the right rate; Non-Flex is the best value rate – or those preferring more flexibility, can opt for the Flex rate. Only bookable on premierinn.com or on the Premier Inn app.

Premier Inn was named the UK’s top-rated hotel chain for 2018 according to Which? With over 800 hotels and more than 76,000 rooms across the UK and Ireland, Premier Inn guests are never far from a great night’s sleep at fantastic value rates. Premier Inn hotels are in more locations than any other UK hotel brand for the ease and convenience of leisure and business travellers alike.