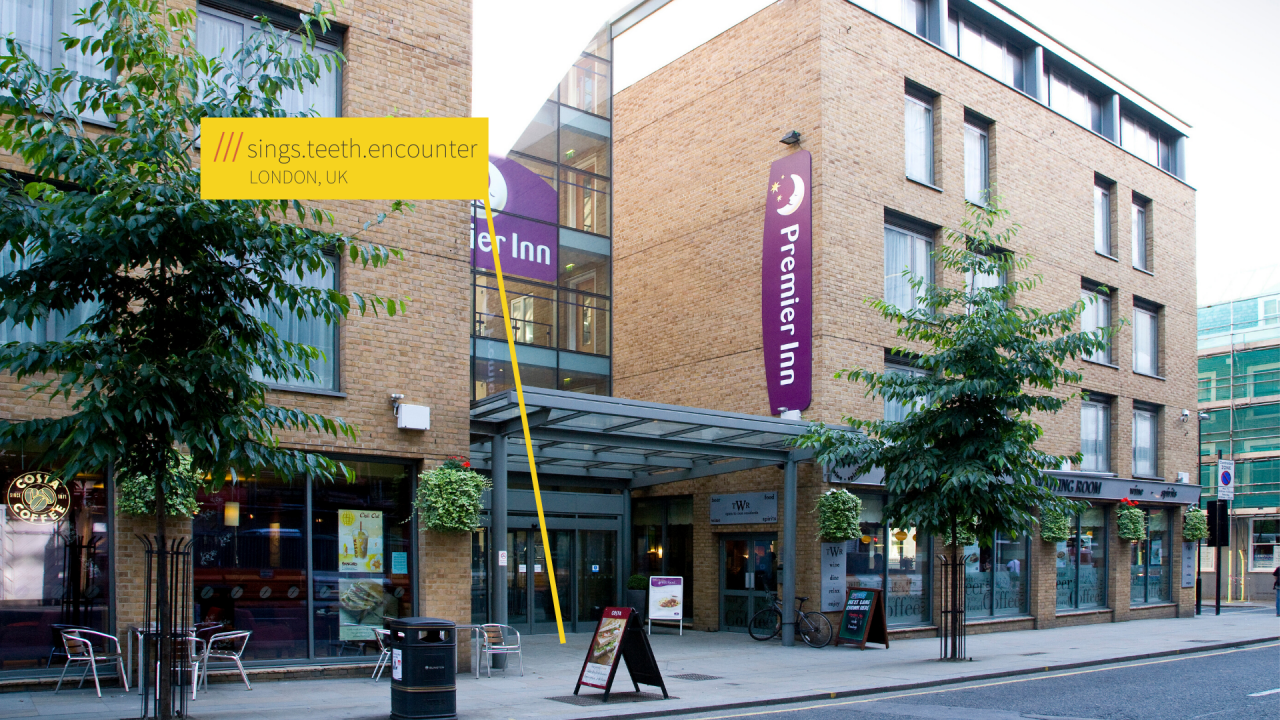 Millions of Premier Inn bookings per year will now include the innovative what3words address in the booking confirmation to guide guests to the precise 3m x 3m square of reception.

London, 09:00, 24 December 2019: Premier Inn, has adopted what3words location technology to guide guests to the correct entrance. The UK’s largest hotel company will provide guests upon booking with a what3words address. With a recent study showing that over half of travellers (52%) saying they’d spent more than 1 hour getting lost on their last trip , these three seemingly random words, will guide guests to the precise 3m x 3m square on which the entrance sits.  Guests can find their hotel faster and more easily, leaving more time to enjoy a relaxing and comfortable stay.

What3words has divided the world into a grid of 3m x 3m squares, and given every 3m square in the world a unique what3words address. Now, people can find the front entrance to any Premier Inn using just three words. For example, ///alert.mats.share is the simplest way to communicate the location of Liverpool Docks’ Premier Inn.

By giving the 800 Premier Inn hotels around the UK a precise 3 word address, guests of the hotel company are less likely to get lost in new cities because they don’t have to rely on inaccurate street addresses. what3words are more precise than street addresses because they point to a particular part of an address, they don’t contain duplicates like traditional addresses (there are 14 Church Roads in London!), and won’t geocode to the wrong place or drop a pin in the centre of the building rather than an entrance. It’s particularly good news for business travellers using Premier Inn for their accommodation, conferences or meetings, as 62% of business travellers say they’ve had trouble finding a hotel whilst travelling.

Anyone can use what3words via the free app and map site at what3words.com. what3words is currently available in 37 languages. The app also works offline, which means that international travellers can use it to find a Premier Inn or other places confidently, and plan their trips abroad more efficiently, without having to worry about expensive roaming charges.

With what3words, Premier Inn is using innovation to promote easier, safer and better travel for everyone. The partnership marks the start of seamless, stress-free travel for Premier Inn guests – where the maximum time is spent on enjoying their trip, and zero time is wasted getting lost.

Giles Rhys Jones, CMO of what3words adds, ‘There is nothing more frustrating than your sat nav claiming that you have arrived at your destination, only to realise you haven’t. Premier Inn Booking confirmations will now have what3words addresses on them, meaning just three words will take guests to exactly where they need to be – with no confusion. Premier Inn are the largest hotel company in the UK, and are setting an exciting standard for embracing new technology to better customer experience.’

Karen Plumb, Commercial Marketing Director for Premier Inn: We’re always on the lookout for new technologies to help our guests have the perfect stay. By adding What3Words innovative, simple and unique location identifiers to our website we are giving our guests a direct route to the check in desk, no matter which Premier Inn they are visiting.

For all media enquiries contact Miriam Frank on miriam@what3words.com

Premier Inn was named the UK’s top-rated hotel chain for 2018 according to Which? With 800 hotels and more than 76,000 rooms across the UK and Ireland, Premier Inn guests are never far from a great night’s sleep at fantastic value rates. Premier Inn hotels are in more locations than any other UK hotel brand for the ease and convenience of leisure and business travellers alike.

Co-founded in London in 2013 by Chris Sheldrick, what3words is the simplest way to talk about location. The system covers the entire world, never needs updating, and works offline. A 3 word address is a human-friendly way to share very precise locations with other people, or to input them into platforms and machines such as autonomous cars or e-commerce checkouts. It is optimised for voice input and contains built-in error prevention to immediately identify and correct input mistakes.

The free what3words app, available for iOS and Android, and the online map enable people to find, share and navigate to 3 word addresses in 26 languages to date. A 3 word addresses in one language can be switched instantly into any other supported language, and even looked up in one language and shared in another. what3words can be easily integrated by businesses, governments and NGOs into apps, platforms or websites, with just a few lines of code, and products are available for free or for a nominal fee for qualifying NGOs.

what3words has a team of over 70 people, across offices in London UK, Johannesburg ZA and Ulaanbaatar Mongolia. In early 2018, Daimler took stake of around 10%, following a Series B raise of £17 million led by Aramex. Prior to this, investors include Intel Capital, Deutsche-Bahn and Horizons Ventures.