Premier Inn installs defibrillators in all its hotels 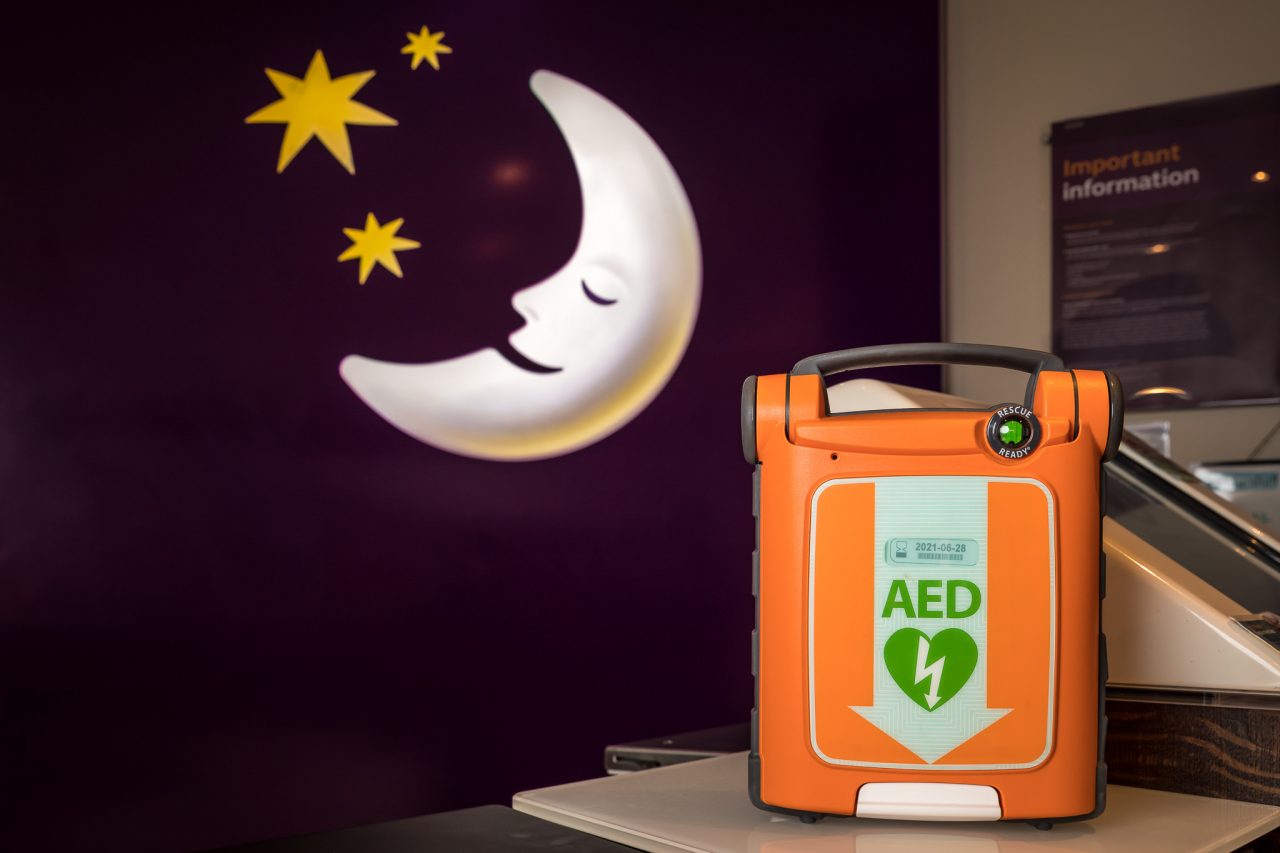 Life saved on first day of 2020 – within days of installation

The Association of Ambulance Chiefs Executives is calling for all major hotel chains to install defibrillators in all their hotels after a newly installed defibrillator at a Premier Inn saved a life on the first day of the New Year – just days after its installation.

Premier Inn, the UK’s biggest hotel company which is owned by Whitbread, today Thursday January 09, reveals it has installed lifesaving defibrillators in all its hotels – a move which has proved lifesaving within just days of installation on the first day of the New Year.

All Premier Inn emergency first aiders are trained in the use of defibrillators and a first-aider is on-site at every hotel 24/7, ensuring thousands of additional trained lifesavers in the UK. Premier Inn welcomes millions of guests each year and presently its’ team members are called to administer CPR in the instance a guest suffers a cardiac arrest. So this significant investment in the provision of immediately available defibrillators is welcomed as a huge asset.

The move has been hailed as having the potential to save countless lives – and indeed has already done so within just days of installation. On January 01, a guest at a pub next to Premier Inn Westminster hub on London’s Tothill Street was in cardiac arrest when the first responder spotted a sticker alerting him to the fact a defibrillator was available in the neighbouring Premier Inn hotel. The equipment was lent to the response team, who later confirmed it successfully saved the patient’s life.

An Automated External Defibrillator (AED) or simply, a defibrillator, is a machine that delivers an electric shock through the heart of a person in cardiac arrest. This shock, which is called defibrillation, is designed to return a heart to its normal working rhythm.

Premier Inn’s defibrillators are all fully automatic devices. Once opened, the machine will talk the user through what to do.  It will analyse whether a shock should be delivered and, if so, tell the user when to do so.  Alternatively, it may ask the user to carry out CPR (cardiopulmonary resuscitation) also known as chest compressions.  All the user has to do is follow the instructions and no training is required.

If a guest or passer-by is having a SCA these devices can make a life-saving difference before the emergency services arrive. Each Premier Inn defibrillator is registered with the emergency services, making them aware of the locations so that in the case of an emergency, the nearest hotel could not only save a guest’s life but also a member of the public.

Anthony Marsh, Chairman of the Association of Ambulance Chief Executives, hailed the move as life-saving and called for others to follow Premier Inn’s lead. He said: “I very much welcome the decision by Whitbread to place a defibrillator at each of their Premier Inn hotels – it’s a move which could save countless lives and I hope other major hotel chains follow suit.

“A cardiac arrest can happen to absolutely anyone; young or old, fit or not.  When someone suffers a cardiac arrest, not to be confused with a heart attack, they are clinically dead; their heart has stopped beating and they will not recover unless someone is prepared to start CPR quickly and a defibrillator is attached to them to reset the heart.

Premier Inn Managing Director Simon Ewins said: “We are absolutely delighted our new equipment has been put to good use so quickly. It’s a wonderful start to the New Year”.

The Powerheart G5 Defibrillators have been provided by Cardiac Science. Cardiac Science is a global organisation who manufacture and distribute this life-saving equipment to companies, healthcare professionals, emergency responders, and the general public.

Shaun Ingram, Managing Director of Cardiac Science UK, said: “We are delighted and very proud to be working with Premier Inn on this sector-leading initiative. Not only does this significant investment demonstrate Premier Inn’s commitment to protecting their employees and guests, but by making them accessible 24/7, it allows broader communities to also benefit, for which they should be congratulated”.

Sudden Cardiac Arrest (SCA) kills up to 60,000 people in the UK every year[1] and affects people of all ages. A sudden cardiac arrest refers to a problem with the heart’s electrical system causing it to suddenly stop beating normally. For every minute that passes without CPR and defibrillation, an SCA victims’ likelihood of survival decreases by up to 10%. Having a defibrillator on hand can be the difference between life and death which is why Premier Inn have taken the initiative to help protect our guests, colleagues & nearby members of the public.

’Sudden cardiac arrest (SCA) is one of the biggest causes of death in the UK; over 60,000 people[1] (which include 12 young people per week[2]) die as a result of a SCA. A SCA victim’s chance of survival increases significantly from around 2% up to c.75%[3]

Cardiac Science develops, manufactures, and markets automated external defibrillators (AEDs) and provides a portfolio of training, maintenance, and support services for AEDs. Its head office is in Deerfield, Wisconsin. The company has customers in almost 100 countries worldwide, including operations in North America, Europe, and Asia. Its UK head office is in Stockport. For more information visit www.cardiacscience.co.uk