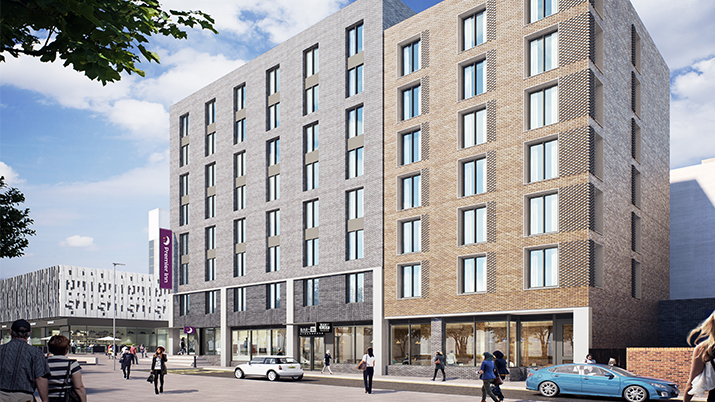 Whitbread announces deal ahead of double openings in Winnersh and Wokingham.

The new hotel is part of the proposed redevelopment of the southern section of the Broad Street Shopping Mall in Reading town centre. It will be a stone’s throw from the renowned Hexagon Theatre and the popular Oracle Shopping Centre and will play an important role in Reading Borough Council’s ambitions to improve the quality of Hosier Street.

Stuart Rose, Acquisition Manager, North East, Midlands, East and Northern Ireland at Premier Inn said: “Securing Hosier Street for a new Premier Inn is very exciting for the business. This deal, along with the two new sites which will begin welcoming customers by the autumn, reflects the strong demand for Premier Inn bedrooms from our customers, who want to stay in and around Reading for business or leisure trips throughout the year.

“Reading is an important commercial centre in the Thames Valley and south of England, and this is only set to increase with the arrival of Crossrail providing a direct link into central London from its terminus at Reading Station. With direct connections to other UK cities, such as Bristol, Birmingham, Manchester and Newcastle, Reading is becoming a major transport hub and we’re proud to be investing in the city’s continued growth.”

Planning consent for the Hosier Street Premier Inn was secured from Reading Borough Council in July. Between 70 and 80 new team members are expected to work at the new Premier Inn and Bar + Block Steakhouse on opening, taking the number of Whitbread employees working in the Reading area to more than 250 once the Premier Inn hotels at Winnersh and Wokingham open for business.

Gary Lewis, Managing Director of Moorgarth Limited, said: “Premier Inn and Bar + Block are two exciting brands that will significantly boost our leisure offer and broaden the range of occupiers at Broad Street Mall. They will enhance Hosier Street and provide a fillip to the town.“

Outside of the UK, Premier Inn’s expansion plans are focused on Germany. Premier Inn opened its first hotel in Frankfurt in 2016 and has more than 6,000 Premier Inn bedrooms in its secured pipeline in Germany.