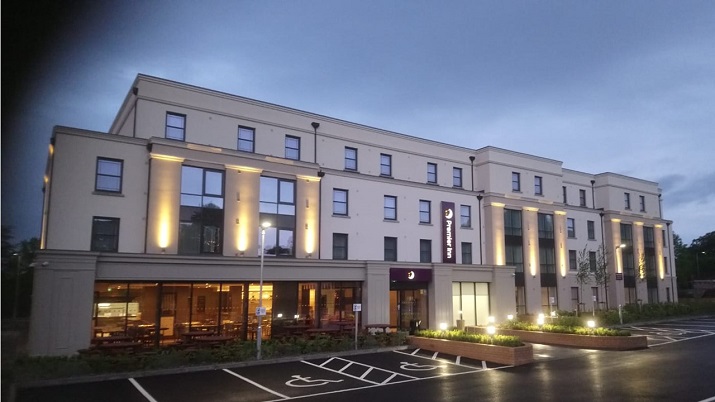 Premier Inn has opened the doors of its latest hotel in central Bangor.  The 85-bedroom hotel is the eighth Premier Inn in Northern Ireland and takes the business to 800 bedrooms across the country.

Located on Castle Park Avenue, metres from Bangor Castle and within walking distance of Bangor Marina and the town centre, the hotel is a £8 million investment by Conway Group in conjunction with Whitbread, Premier Inn’s parent company, which has created 35 year-round jobs on opening.

Ahead of launching the hotel on Friday 5th July, Alderman Bill Keery, Mayor of Ards and North Down, welcomed the new addition to Bangor’s accommodation offer. He said:

“It is a great pleasure to welcome Premier Inn to Bangor with this fantastic new hotel.  It will make a very significant contribution to the accommodation offering locally and is much needed as we begin to explore other exciting opportunities for the town that will attract more visitors over the next five years. The Council has recently signed a £50 million agreement for a mixed-use redevelopment of Queen’s Parade and, as part of the Belfast Region City Deal, has secured £60 million for the regeneration of a two-mile stretch of the coastline from Pickie to Ballymacormick Point – plans that will reimagine Bangor for both residents and visitors.

“I would offer my very best wishes to all the staff team in Bangor who have been working so hard to get the hotel open.  I hope you have a fantastic summer season and many successful years ahead in Bangor.”

The opening represents the latest phase of Premier Inn’s investment in Northern Ireland and follows the granting of planning consent for a 51-bedroom extension of the Lisburn Premier Inn (consented in mid-June).

Commenting on the launch, Kevin Murray, Head of Acquisitions for Premier Inn in Ireland and northern England, said:

“Premier Inn Bangor is another excellent hotel development for Premier Inn. The hotel is right where our customers will want us to be, with the transport connections and accessible parking they expect from Premier Inn, and features our latest specification bedrooms and family-friendly in-house restaurant.  It’s an excellent showcase for the quality of our hotels and we’re expecting it will be popular with leisure and business guests year-round.

“Our presence brings a different type of accommodation to Bangor and will bring long-term benefits for the town. The hotel has created permanent opportunities for the community, and I’m certain our guests will boost the local economy as they head out to enjoy the town and be entertained.  It’s a development we are immensely proud of and we’re looking for similar opportunities across the country as Premier Inn continues to grow.”

The hotel was built by PJ Conway Contractors Ltd who redeveloped the site of the former Bangor Leisure Centre into the latest generation Premier Inn. In total, the construction of the hotel took 17 months, with recruitment at the hotel starting three months ahead of opening.  Recruitment of the new team was focused through the local Job Centre Plus.

“We are delighted to have successfully developed yet another high-quality Premier Inn Hotel, to add to our commercial investment portfolio. The new hotel in Bangor is the latest scheme, which we have developed in conjunction with Whitbread, having previously built/developed new Premier Inn Hotel accommodation in Lisburn, Crescent Link/Altnagelvin, Carrickfergus and Waring Street, Belfast.

“We have no doubt that the new Premier Inn Hotel will help attract more visitors to the locality and meet the existing need for quality hotel accommodation, which is great news for Bangor and North Down. We look forward to building upon our longstanding working relationship with Premier Inn, as part of their planned expansion of new hotel accommodation throughout Ireland and the UK.

In its most recent annual results, Whitbread confirmed its intention to continue to expand Premier Inn from over 76,000 rooms today to 110,000 UK and Ireland bedrooms. Outside of the UK Premier Inn is expanding rapidly in Germany, with a development pipeline of more than 7,000 bedrooms, and in the Republic of Ireland where it has a requirement for 2,500 Premier Inn rooms in Dublin.

Based in Magherafelt, it employs approximately 700 staff throughout its Group businesses and associated companies.