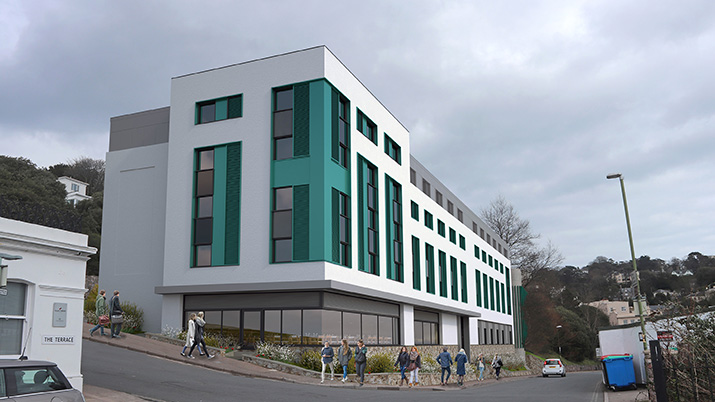 The hotel supports wider economic and tourism objectives, underlining the English Riviera as one of the country’s top ten visitor destinations and meeting consumer expectations for branded hotels in Torbay.

It will benefit Torbay by attracting new and all year round visitors, by encouraging further investment and by improving the quality of accommodation available. It will also help to regenerate Torquay town centre as Premier Inn’s customers go out to eat, drink and be entertained in and around Torquay Harbour.

The new Premier Inn hotel, which was granted planning consent unanimously by Torbay Council’s Planning Committee on Monday (12th August), will be located just off Montpellier Road in central Torquay, on part of the currently under-used Terrace Car Park. The location is minutes from The Strand and Torquay Harbour and the proposed hotel will enjoy views over Tor Bay.

“This is a great example of how Torbay Council is using its assets and its skills to deliver development that is of huge value to Torbay. This project supports front line services provided by the Council for the community, generates jobs and skills development, and it supports the community’s town centre regeneration ambitions. Approximately 30 new year-round jobs are expected to be created, with recruitment and training focused in Torquay and the surrounding area.”

Whitbread will be taking a long-lease on the completed hotel building which has been designed carefully to fit with its surrounding and meet Whitbread’s latest requirements.

Midas has been appointed by the Council to build the hotel. It is expected that work on site will start in the autumn with a targeted completion date of March 2021.

“Securing unanimous planning consent for the 120-bedroom Premier Inn on Montpellier Road demonstrates the quality of the new hotel and the long-term benefits we will bring. More and more Premier Inn customers are staying with us for leisure breaks and staycations in Devon and Cornwall and our desire for a second Premier Inn hotel in Torquay reflects strong demand for Premier Inn bedrooms in the town year-round. We are confident the hotel will be very popular with our guests when the doors open.”

The recruitment process for new Premier Inn hotels starts approximately three to four months ahead of a new hotel opening and Premier Inn has policies targeting recruitment of those not in employment, education or training (sometimes referred to as ‘NEETs’), particularly young people in the 16-24 age bracket. The business intends to work with the local Job Centre Plus to ensure that the job opportunities arising from the new hotel are targeted at local people.

The hotel will be Premier Inn’s second hotel in Torquay, adding to the seafront hotel on Shedden Hill Road. In the wider Torbay area Whitbread also operates two Premier Inn hotels in Paignton (Paignton Seafront and Paignton South) and an 84-bedroom Premier Inn in Newton Abbot.

Premier Inn was named the UK’s top-rated hotel chain for 2018 according to Which? With over 800 budget hotels and more than 76,000 rooms across the UK and Ireland, Premier Inn guests are never far from a great night’s sleep at fantastic value rates. Premier Inn hotels are in more locations than any other UK hotel brand for the ease and convenience of leisure and business travellers alike.

Outside of the UK, Premier Inn’s expansion plans are focused on two key markets; Germany and the Middle East, with plans to expand in Ireland. Premier Inn opened its first hotel in Frankfurt in 2016 and the business has more than 6,000 Premier Inn bedrooms in its secured pipeline in Germany.

Set up in 2011 to deliver Torbay Council’s economic development, TDA is now a multi award winning company delivering services to public sector clients across the country.

TDA provides business and property services in Cornwall, Devon, Somerset and Dorset. As a business with a social purpose the income generated by TDA is used to positively impact on the economic and physical regeneration of Torbay.

In April 2017, Torbay Council put in place a strategy to transform Torbay’s town centres. This strategy provides a sharp focus for ongoing regeneration work with the emphasis on place making, coupled with high quality development, which delivers a range of benefits to Torbay and drives further investment. The Council is leading the delivery of that strategy (with projects such as development at Terrace Car Park), to encourage further investment by the private sector in Torbay. The Strategy complements the Council’s Economic Strategy and Local Plan, the Culture Strategy, the Destination Management Plan and Neighbourhood Plans, the completed town centre masterplans and Torbay Harbours masterplan.

In October 2017, the Council agreed a £25m Town Centre Regeneration Fund to deliver regeneration projects. This hotel is one of those projects.