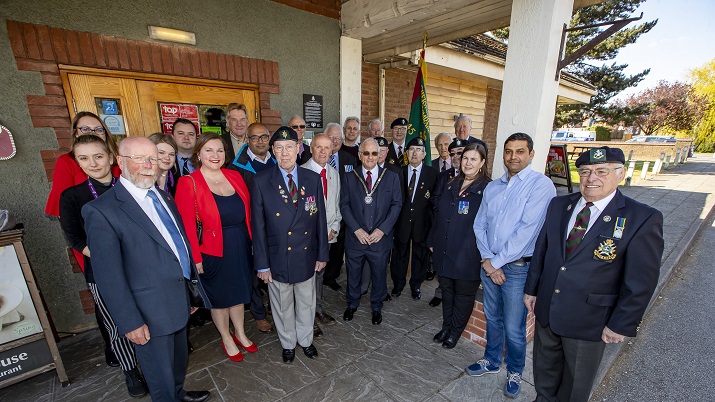 Premier Inn has joined forces with the Derbyshire community to honour local heroes.

The UK hotel company worked with South Derby residents to pay tribute to soldiers’ who were stationed at the since-demolished Normanton Barracks, now its Derby South Premier Inn and Oasthouse Table Table restaurant.

A permanent tribute to the serving personnel has been installed in the building that currently occupies the historic site.

The residents, who approached Premier Inn to install a lasting tribute to the Barracks on the building, unveiled a plaque today (Thursday 11th April) in commemoration of the history of the site and the thousands of soldiers who enlisted and trained there.

John Todd, a local resident, who led the campaign to install the permanent plaque said: “I contacted Premier Inn about a plaque around the time of the centenary of the first world war.  The services reminded me of the importance of the Barracks to South Derby and the many young men who enlisted and trained there over its 80-year existence.  Many made the ultimate sacrifice and it seemed only right to permanently recognise their bravery and the significance of the Barracks in the history of our community.”

Normanton Barracks was the headquarters and deport of the Nottinghamshire and Derby Regiment – “The Sherwood Foresters”.  The barracks was established in 1881 and mobilised during the Boer War at the turn of the 20th century and for the two World Wars, where it was operating at full capacity.  At its busiest point, 315 recruits were kitted out in one day.

With funding cuts in the 1960s, the Forresters vacated the barracks for a Brigade Depot in Leicester in the early 1960s and the site was demolished in 1981.  The Derby South Premier Inn hotel and Oasthouse Table Table restaurant have occupied the former barracks site since 1989.

Jim Francis, Head of Refurbishment and Maintenance for Premier Inn, said: “Up and down the country, Premier Inn hotels serve the communities in which they are located. Given the history of the Normanton Barracks site, and the importance of The Forresters to the local community, it was a pleasure to install a lasting memorial to the regiment on the Derby South Premier Inn and pay tribute to the many young men who once enlisted and served there.”

A former Brigadier of The Forresters regiment, Edward Wilkinson, along with the Deputy Mayor of Derby, Cllr Frank Harwood, and the manager of the Derby South Premier Inn led the unveiling of the new plaque with more than twenty members of the community.

An ex-soldier who served with The Forresters in Northern Ireland in the mid-1960s, and wished to remain anonymous, added: “The Barracks played an important role in the community for over eighty years, including during two world wars.  Seeing the shiny new plaque in a prominent position outside the restaurant will ensure guests and diners know about the Barrack’s history for years to come.”

Premier Inn has six hotels in Derby and more than 74,000 rooms in more than 785 hotels across the UK and Ireland.