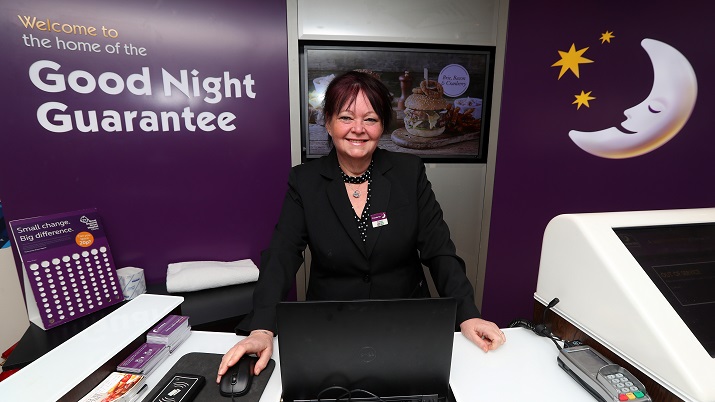 They say you’re never too old to learn something new and that’s certainly true for a breed of older learners who are using ageless apprenticeships – dubbed pension-ships – and commencing a new career in their fifties and beyond.

Whitbread, the UK’s largest hospitality company and owner of both Premier Inn and Costa, has seen this trend first hand as it offers ageless apprenticeships as part of its’ wide-ranging WISE (Whitbread Investing in Skills and Employment) scheme.

In fact, just 10 per cent of Whitbread’s apprentices currently in learning are under the age of twenty – challenging the notion apprenticeships are most commonly done by people at school.

News has been welcomed by Robert Halfon MP, Chair of the Education Select Committee.

He said: “I’ve met Whitbread Apprentices in Premier Inns all over the country and they are second to none. It is fantastic to see a company doing so much to give young – and older – people alike a chance to climb the educational ladder of opportunity to get jobs, security and prosperity for their futures.

He added: “It’s fantastic to see a great British business like Whitbread invest so heavily in its apprenticeship scheme, and its focus on lifelong learning and skills is particularly pleasing. I encourage other businesses to follow Whitbread’s lead”.

The latest government figures on apprenticeships also support this trend of supposed retirees speeding up rather than slowing down: 13 per cent of new apprentices in England are over 45. Additionally, 4,000 over 60’s started an apprenticeship in the same period.1

This is reflected in the growth of the number of over 25’s undertaking apprenticeships. In 2009/10; the majority of apprentices were school-leavers and their older counterparts represented just 18 per cent of apprentices. In 2016/17, over-25’s represented 46 per cent – a staggering increase.1

For older apprentices, the reasons for taking part are varied. Many are choosing to opt for an apprenticeship so they can start an alternative career instead of considering their retirement options or they’re taking advantage of an empty nest and setting themselves a new challenge. For some it’s a chance to drive their careers forward or learn a new skill, for others it’s the chance to prove they can get the qualifications which they may have missed out on at school.

The right support is key. Margie Lloyd, 53, who worked at the Malvern Premier Inn believed her classroom days were behind her. It took a supportive manager to put her forward and encourage her to become an apprentice. Now she has completed a Level 3 apprenticeship where she learnt to run a hotel herself – and gained qualifications equivalent to A Level. Margie comments:

“It can be scary to go back into a classroom after such a long time away from it, but my manager at Premier Inn encouraged me to try doing an apprenticeship. Then once I started, the continued support of my tutor took any fears away and helped me get the qualifications I need to manage a site. This has given me a massive confidence boost and I’m so glad I was given this opportunity.”

For companies, however the reasons to take on apprentices are clear. Apprenticeships are proven to boost employee retention – which is a major issue for hospitality companies such as Whitbread. However, team members who complete apprenticeships are nearly three times as likely to stay at the company for more than 12 months. In England and Wales in 2016, 65 per cent of employers reported that all their recent apprentices remained working for them.2

Sandra Kelly, Head of Education at Whitbread, had this to say about the scheme:
“Like most companies, team members are our biggest asset – their hard work and dedication is what makes Whitbread a success, so it’s key we invest in them. We also passionately believe there should be no barriers to entry or ambition – and that includes age – which is why all our apprenticeships are ageless. We like to call them ‘pension-ships’, of course, they are nothing to do with being of pensionable age but it’s a memorable and fun way to illustrate that age is no barrier to learning.

“We’ve seen first-hand the positive impact that older apprentices can make as they’re able to bring their broader life experience to the table.”

There are other benefits too: government research shows employers who have an established apprenticeship programme reported that productivity in their workplace had improved by 76 per cent whilst 75 per cent reported apprenticeships improved the quality of their product or service.3

Indeed, ‘pension-ships’ are part of larger trend of employers using innovative ways to attract and retain staff. In recent years, ‘returnships’ have helped career women return to work following time out from having children. At Whitbread, employee placements aimed at getting unemployed individuals – often with challenging backgrounds – into work has proved successful. Indeed, a third of people who undertake such a placement secure a permanent job.

Whitbread is ranked no. 8 in the Sunday Times Best Big Companies to Work For list and employs around 50,000 people in over 2,300 outlets across the UK, serving over 28 million customers every month.

Whitbread has ambitious growth plans to increase the number of Premier Inn UK rooms to around 85,000 and to achieve global system sales of around £2.5bn for Costa by 2020.

At Whitbread we are committed to being a force for good in the communities in which we operate. Our Sustainability programme, ‘Force for Good’ is focused on enabling people to live and work well and is built around three pillars of Opportunity, Community and Responsibility.

Whitbread PLC is listed on the London Stock Exchange and is a constituent of the FTSE 100. It is also a member of the FTSE4Good Index.

About WISE (Whitbread Investing in Skills and Employment)

Whitbread aims to be the no. 1 choice for anyone who wants to build a career in hospitality.  It believes there should be no barriers to entry, no limits to ambition and we offer a world of opportunity, where people can develop their skills and work across many functions from Marketing to Finance, Digital to Operations, and HR to Communications.

With an investment of around £12 million every year, it runs a number of industry-leading programmes to support team members at every level of their development.  These include: apprenticeships, employee placements, working with The Prince’s Trust, graduate programmes, a ‘Shooting Stars’ programme and ‘Skills Academies’ amongst others.

Over the next three years, Whitbread will be almost doubling the number of apprenticeship programmes available to new and existing staff of all ages, welcoming up to 1,500 new apprentices each year across their Premier Inn, Costa and Restaurant operations.