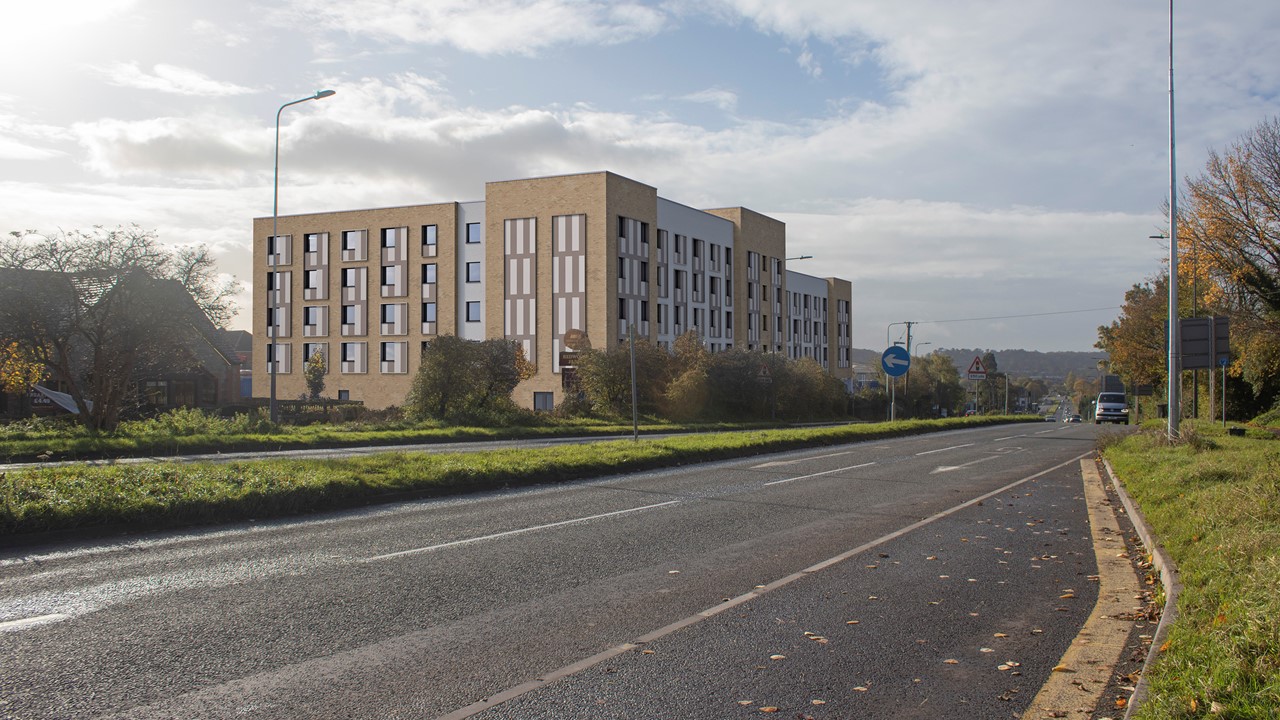 Whitbread, the owner of the Premier Inn hotel chain, has secured planning permission to rebuild the Cribbs Causeway Premier Inn – bringing an improved hotel and restaurant back to the popular Bristol location.

Following a fire at the site in July 2019, the previous 177-bedroom hotel and restaurant was severely fire damaged. The granting of planning permission by South Gloucestershire Council will allow Whitbread to clear the site and build a new and improved Premier Inn hotel and restaurant.

The new hotel design will follow the same ‘U shaped’ building footprint as the previous hotel but with a simpler and more up to date design style. Whitbread has added six additional hotel bedrooms to the plans, to create a 183-bedroom hotel, and the section of the building facing onto Cribbs Causeway has been raised by a storey to accommodate an undercroft car parking area.

A 150-cover restaurant and meeting rooms, which were well-used at the previous hotel, are also included in the designs and will be available for residents and guests to use.

Premier Inn has successfully operated a hotel at Cribbs Causeway for over 15 years. The hotel is extremely popular, operating at an above average occupancy rate and regularly being full, and Whitbread expects the high-level of demand to continue once the new hotel is open.

Richard Aldread, Head of Construction in the UK regions and Ireland at Whitbread, said:

“Getting the green light to rebuild the Cribbs Causeway Premier Inn is positive news for Whitbread and Bristol. We committed early to rebuilding the hotel following the 2019 fire and our new design will deliver a latest specification Premier Inn in an important and popular location. We have been working on the plans for many months but with planning permission now granted, we’re looking forward to getting onto site later this summer and our aim is to have the building complete by the end of 2021.”

In its report to Councillors, Gloucester City Council planning officers praised the architectural styling of the new hotel and restaurant and the proposed landscaping around the site. It was also noted that the new hotel and restaurant would achieve a BREEAM ‘very good’ rating – achieving an additional 35% reduction in CO2 emissions over and above the standards set in the Building Regulations 2013.

The approved Cribbs Causeway hotel and restaurant was designed by Axiom Architects and TowerEight has been appointed to project manage the build.

Once open, the hotel, like the rest of Premier Inn’s estate, will be operating with strict safety procedures, including the provision of hand sanitiser, screens at check-in, floor markings to enforce social distancing and enhanced hygiene and cleaning regimes.

Premier Inn was named the UK’s top-rated large hotel chain for 2018 according to Which? With over 800 hotels and more than 78,000 bedrooms across the UK and Ireland, Premier Inn guests are never far from a great night’s sleep at fantastic value prices. Premier Inn hotels are in more locations than any other UK hotel brand for the ease and convenience of leisure and business travellers alike.

Across the estate, the average Trip Advisor score for Premier Inn hotels is 4.2. The business has been awarded the Best UK Family Hotel in the TripAdvisor Travellers’ Choice Awards for the 2nd year running, and has just been named as one of TripAdvisor’s ‘most excellent hotel chains in the world’.

Outside of the UK, you will find Premier Inns in the Middle East and Germany with plans to expand in Ireland. Premier Inn also has exciting expansion plans in the German market where it expects to operate 20 hotels across the country by the end of 2020 and has almost 10,000 bedrooms in its open and committed pipeline.