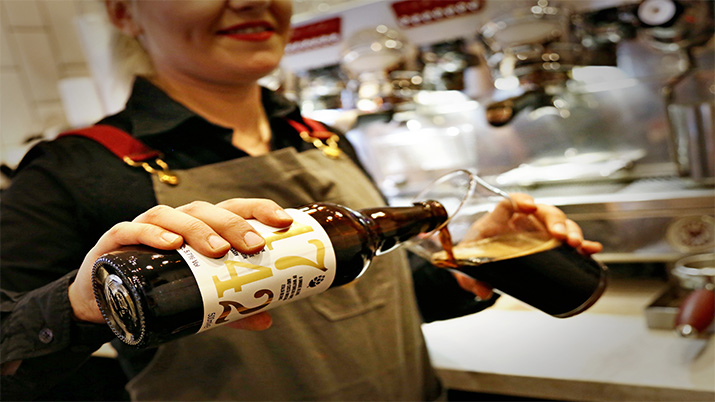 Today, Whitbread, one of the UK’s oldest and most respected companies, celebrates its 275th anniversary with a limited-edition coffee infused beer; 1742. Made with Costa’s famous Mocha Italia beans, just 5,000 bottles of the craft brew will be available exclusively at selected Premier Inns across the UK for the next month.

Combining its coffee roasting expertise with its rich brewing heritage, 1742 will be Whitbread’s first beer since it turned off the taps in 2000. Partnering with Black Sheep Brewery, Whitbread has created a smooth and creamy coffee stout using WGV, one of Whitbread’s original hops. Championing the latest trend for coffee-infused beer, 1742 appeals to craft beer and coffee enthusiasts alike with its combination of roasted malt flavours and the intense character of Costa’s Mocha Italia coffee, which has slightly sweet caramel notes.

Marking the year Whitbread was born, 1742 is a beer that tells a story, fromSamuelWhitbread’s humble beginings as a brewer in London, to becoming the third oldest company in the FTSE 100. Built on a history of innovation, Whitbread was the first brand to pair beer with food, and use celebrities in its advertising campaigns. Foreseeing the emerging trend for coffee, Whitbread bought Costa Coffee in 1995 and has grown it to be the UK’s number one coffee shop brand.

Alison Brittain, Whitbread Chief Executive commented, ”275 years is a huge milestone for Whitbread, it’s an occasion to celebrate our heritage, history of innovation and most importantly, the people – our 50,000 employees – who make it what it is today. As a company that has evolved with consumer tastes and trends, 1742 seemed the perfect way to both tell our story and celebrate.”

Gennaro Pelliccia, Costa’s Master of Coffee commented, “What better way to celebrate Whitbread’s rich history of innovation, than by combining our past brewing expertise with the nation’s favourite Costa Coffee Mocha Italia blend? 1742 celebrates the current growth and trend of coffee and craft beer – offering a smooth and creamy coffee flavoured beer with a touch caramel. It’s a truly unique drink that I’m excited for customers to try. Cheers to Whitbread!”

Whitbread PLC is one of the UK’s oldest and most successful companies and this year celebrates its 275th anniversary. Whitbread is the owner of the UK’s no. 1 coffee shop brand, Costa Coffee, and no. 1 hotel brand, Premier Inn, as well as leading restaurant brands including Beefeater and Brewers Fayre.

Whitbread is ranked no. 8 in the Sunday Times Best Big Companies to Work For list and employs around 50,000 people in over 2,200* outlets across the UK, serving over 28 million customers every month.

Whitbread has ambitious growth plans to increase the number of Premier Inn UK rooms to around 85,000 and to achieve global system sales of around £2.5bn for Costa by 2020.

At Whitbread, we are committed to being a force for good in the communities in which we operate. Our Sustainability programme, ‘Force for Good’ is focused on enabling people to live and work well and is built around three pillars of Opportunity, Community and Responsibility.

Whitbread PLC is listed on the London Stock Exchange and is a constituent of the FTSE 100. It is also a member of the FTSE4Good Index.

*1742 will also be sold at Costa Coffee, Wandsworth

Coffee addition to the brew: