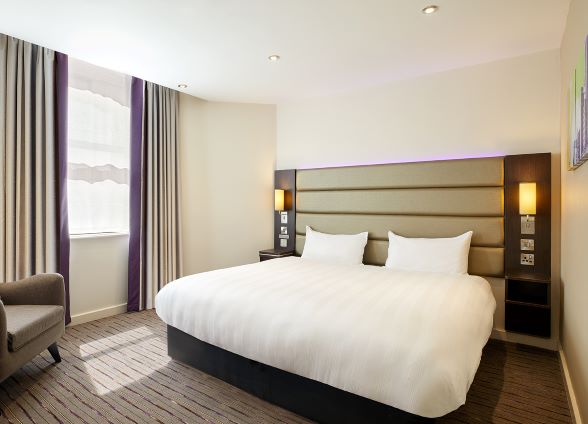 In an announcement which follows the phased reopening of its hotels to the general public, Premier Inn is checking-in Leo Burnett London as its creative partner.

Leo Burnett was selected following a competitive pitch amongst a shortlist of agencies specially selected by the hotel company as mirroring its brand values.

The London-based agency will handle all aspects of the Premier Inn brand, from above the line advertising to activation and helping deliver a global brand approach in Germany.

Consistently voted among the UK’s best-loved hotels, Premier Inn already has a formidable brand presence – its iconic moon and stars logo and signature purple colour palette are instantly recognisable to the millions of guests who stay each year.

Leo Burnett, which represents businesses including McDonald’s and Vision Express, wowed Premier Inn by demonstrating an innate understanding of the hotel market and passion for the brand as well as offering a strategic look how the business can thrive in a changed post-Covid market.

The Leo Burnett team really rose to the challenge of a ‘lockdown’ pitch process, which continued virtually over four months, impressing the Premier Inn team, despite meeting face-to-face just once.

The agency join Premier Inn at an exciting – and pivotal – time for the hotel company, which welcomed seasoned travel and leisure industry expert Tamara Strauss as Brand Marketing Director in back in the autumn.

The business is strengthening its presence internationally, with hotels opening apace in Germany, where it is soon set to be one of the country’s biggest budget hotel operators.

It also continues to innovate as the UK’s leading budget hotel chain, including with the launch of its new Premier Plus rooms, its ‘best-ever’ pillows, new flexible room rates and its enhanced CleanProtect hygiene promise in response to Covid-19.

It is also no secret that it has been a challenging time for everyone in hospitality, and the appointment will also help reaffirm Premier Inn’s position as industry-leader at a time when hotels across the globe get back to business in the ‘new normal’.

Brand Marketing Director Tamara Strauss commented: “Premier Inn is a truly iconic British brand and we are absolutely delighted to check-in Leo Burnett London at this important stage of our journey as we develop an integrated approach as we re-connect with our leisure and B2B customers as well our 35,000 team members who engage with our customers every day ”.

Charlie Rudd, CEO, Leo Burnett: “Over the past few months some brands have been playing a lynchpin role in people’s lives. This is absolutely the case for Premier Inn which has been meeting people’s most fundamental needs supporting key workers, charities and community groups. As the hospitality industry reopens its doors, the hotel brands that will win are the ones that embrace bold creativity and change. We look forward to helping Premier Inn reconnect with its customers through populist creativity.”

Premier Inn was named the UK’s top-rated hotel chain for 2019 according to Which? With over 800 hotels and more than 76,000 rooms across the UK and Ireland, Premier Inn guests are never far from a great night’s sleep at fantastic value rates.

Premier Inn hotels are in more locations than any other UK hotel brand for the ease and convenience of leisure and business travellers alike. All Premier Inn bedrooms feature en-suite bathrooms, a luxurious Hypnos® bed, a choice of pillows, TV with Freeview and free Wi-Fi. A bar and restaurant is situated either on-site or next door to each hotel, offering a wide range of food and drink including a delicious all-you-can-eat breakfast.

Leo Burnett London is a creative agency that specialises in bringing the power of populist creativity to its clients, including McDonald’s, Premier Inn, Iceland, Kellogg’s and Vision Express.Leo Burnett is part of Publicis Groupe UK.