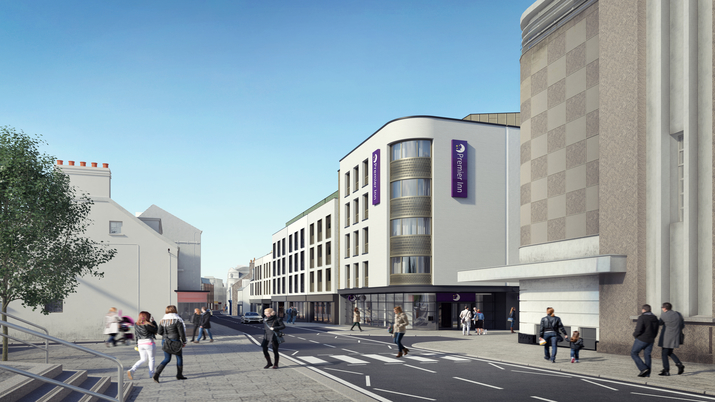 £70m redevelopment to include housing, plus retail, bar and restaurant units

Le Masurier, the Jersey property investment and development company, has entered into an Agreement To Lease with Whitbread, Premier Inn’s parent company, to bring a second Premier Inn hotel to Jersey, as part of a major redevelopment in the north of St Helier.

The proposed £70 million Bath Street Redevelopment will provide for substantial regeneration, employment, housing and a boost for tourism. It will include:

St Helier’s second Premier Inn is expected to create 35 new jobs and accommodate 40,000 overnight stays in Jersey, with the potential to attract annual visitor spend of £1.6 million and, in turn, support over 30 new year-round jobs in the tourism sector. The wider redevelopment is also expected to create over 70 full time jobs in the construction industry.

Le Masurier, which has remained under Jersey family ownership since 1835, is holding two public exhibitions of the plans for the Bath Street Redevelopment at the Freedom Centre (formerly the Odeon Cinema). Islanders are invited to attend on the afternoons of the 9th and 10th April to see images of the impressive new site and to leave feedback.

“Our Bath Street Redevelopment represents a significant £70 million investment in St Helier, helping with the much-needed regeneration of the north of town and boosting tourism and business. In addition, the impressive new residential units will help to meet the demand for housing that the Island has, and St Helier specifically.”

He added: “We are delighted to partner with Whitbread in bringing a second Premier Inn to Jersey. Despite the whole Brexit uncertainty, this demonstrates Le Masurier’s confidence in investment in Jersey and also Whitbread’s confidence in the Island – and follows the success of their first Premier Inn at Charing Cross. I believe that this is a real success story for Jersey and will provide a host of social and economic benefits.”

“We’re excited to sign an agreement to lease to bring a second Premier Inn to Jersey less than a year after opening our first on the Island. Jersey is a relatively new market for Premier Inn and our confidence to invest further in the Island has been underpinned by the strong performance of our Charing Cross hotel.

“Since opening in July 2018, the Charing Cross Premier Inn has consistently achieved above average occupancy rates and positive guest feedback. This strong performance, along with the high level of interest from our customers searching for Jersey on the PremierInn.com website, has encouraged us to partner with Le Masurier and invest in the Bath Street site.”

“I am delighted to support this major regeneration of the north of St Helier. It will significantly improve business and tourism in the area and, importantly, with more green areas and proposed wider pavements it will considerably improve the look and feel of this significant gateway to town.”

Le Masurier is one of Jersey’s oldest and largest property companies with real estate assets located in Jersey, the United Kingdom and throughout continental Europe. The Group’s strategy is to achieve long-term growing, secure and sustainable income. The investment risk profile of the Group is aligned with the culture of the ultimate beneficial owners and follows a risk averse, conservative and long-term growth strategy.