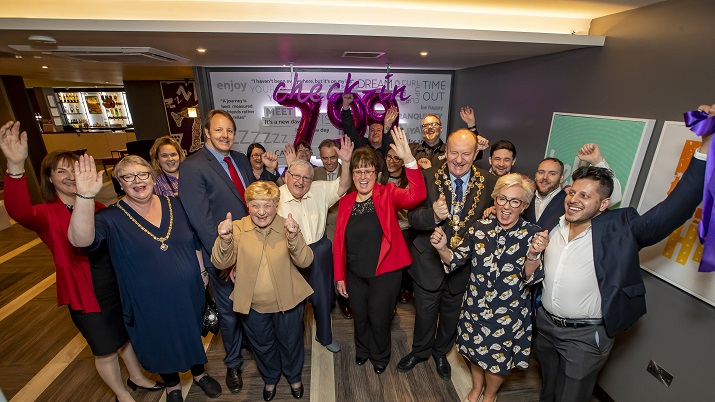 It was a case of from checkout to check-in today (Friday, April 12) as Chesterfield’s long-awaited Premier Inn opened its doors on the site of the former Co-op building – with help from town dignitaries and former employees.

The brand-new hotel, which occupies a prime town-centre position on Elder Way was opened by Toby Perkins MP who was joined by a host of other VIPs and former Co-op workers, who were all invited to see the stunning transformation of the site.

The new 92-bed Premier Inn is part of a multi-million investment into Chesterfield by Jomast Developments. The hotel has created a total of 35 new jobs, 17 of which went to candidates from sector-based work academies.

Situated just a stone’s throw from the train station and the town’s main shopping area as well as being within easy striking distance of attractions such as Chatsworth House, the new Premier Inn is widely welcomed as an important part of the town’s ongoing regeneration.

First to sample the hotel were some of the Co-op’s former workers, who were invited to stay over free of charge the night ahead of opening (Thursday, April 11). Celebrations continued long into the night as an estimated 200 local residents packed into the in-house Premier Inn restaurant to enjoy complimentary treats including mini fish and chips and other appetising dishes.

They were today joined by Toby Perkins MP and other dignitaries from the council as well as representatives from the developer and the local Job Centre, with whom Premier Inn has worked closely ahead of opening.

Toby Perkins MP said: “I am thrilled that Premier Inn have shown confidence in our town. People across Chesterfield will be pleased to see this iconic building being put to an exciting new use in a way that also strengthens the tourism and dining offer. This is another example of the confidence that investors have in local people and the environment that we have here in Chesterfield. I also welcome the new jobs and opportunities that this has created, and I am delighted to be declaring this hotel open for business.”

Hotel Manager Omar Khan: “We couldn’t be more thrilled to check-in to Chesterfield. Our glorious new Premier Inn hotel is in a beloved building right in the heart of town and through the attraction of guests throughout the year and the creation of 35 new local jobs, we are really looking forward to playing our part in Chesterfield’s ongoing success”.

Former Co-op manager Mike Harrington, 71 from Linacre Woods worked at the Co-op for 40 years, having started at just 16 years old. Mike, who even met his wife who was a Co-op hairdresser in the store, was thrilled to see the changes. He said: “Everyone was worried the Co-op building would be knocked down. It is difficult to describe what people felt about the building – we loved it, it was part and parcel of all of us. All the Co-op workers kept in touch and we were thrilled to hear it would be re-development. The redevelopment is a wonderful job – so bright, clean and fresh – it’s just stunning. Getting the chance to visit again, see the building have a new lease of life and meet up with old friends – some of whom we haven’t seen in 20 years – is just fantastic. We can’t thank Premier Inn enough, their team have been incredibly welcoming and it has been lovely to make new connections and meet the people working here. I’ll definitely be popping back in for dinner and I never thought that I would become a regular of the place I used to work”.

Premier Inn Chesterfield Town Centre is situated on Elder Way. Premier Inn has 800 hotels across the UK. Rooms are available for £35 and under.