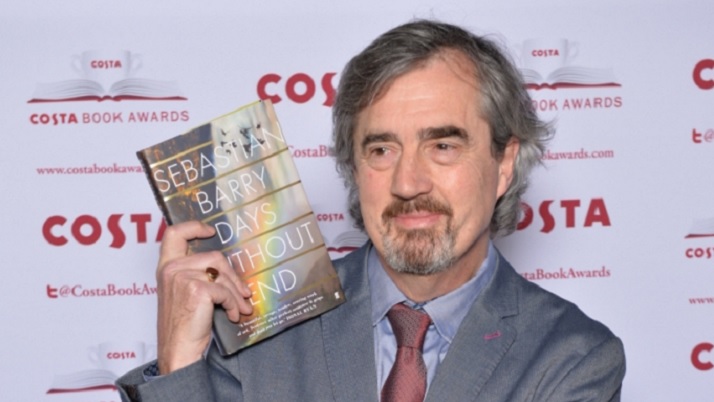 London, 20:30 31st January 2016: Days Without End, a powerful novel of duty and family set against the American Indian and Civil Wars by Irish novelist and playwright Sebastian Barry, has been named the 2016 Costa Book of the Year.

Barry’s win secures him a unique place in literary history as the first novelist to ever win the overall Book of the Year twice.  Poets Seamus Heaney and Ted Hughes are the only two writers to have achieved the double to date.* Barry first won the Book of the Year in 2008 for his fourth novel, the bestselling The Secret Scripture.

The announcement was made this evening (Tuesday 31st January) at an awards ceremony held at Quaglino’s in central London.

Days Without End, Barry’s seventh novel, sees narrator Thomas McNulty recount how, having fled Ireland when orphaned during the Great Famine, he made his way across America as part of the US Cavalry. With his long-time friend and companion John Cole, Thomas witnesses the birth of America – from the atrocities committed against the Native Americans to the horrors of the Civil War – and, ultimately, finds his own family and identity.

Professor Kate Williams, chair of the final judges, said: “We all loved this magnificent, searing, thrilling book – brutal, terrifying yet with moments of light and beauty.  Brilliant writing that takes you to the depths and the heights of humanity, and a voice you simply can’t forget.”

Barry beat bookmakers’ favourite, debut non-fiction writer Keggie Carew, for Dadland, debut novelist Francis Spufford for Golden Hill, poet Alice Oswald for Falling Awake, and YA writer Brian Conaghan for The Bombs That Brought Us Together to win the overall prize and a cheque for £30,000 at the awards ceremony.

Originally established in 1971 by Whitbread Plc, Costa announced its takeover of the sponsorship of the UK’s most prestigious book prize in 2006. 2016 marks the 45th year of the Book Awards.

Since the introduction of the Book of the Year award in 1985, it has been won twelve times by a novel, five times by a first novel, six times by a biography, seven times by a collection of poetry and twice by a children’s book.

Established in 2012, the new Award – run in association with the Costa Book Awards but judged independently of the main five-category system – is unique in that it was judged anonymously (ie without the name of the author being known throughout the process).  It is for a single, previously unpublished short story of up to 4,000 words written in English by an author aged 18 years or over, and is open to both published and unpublished writers.

A shortlist of three stories was selected by a panel of judges – Sarah Franklin, Joe Haddow, Adele Parks, Simon Trewin and Kit de Waal – and then made available on the Costa Book Awards website for the public to download and vote for their favourite.  Costa Managing Director, Dominic Paul, announced the winner and runners-up and presented them with their cheques.

· * Seamus Heaney won the Book of the Year in 1996 for The Spirit Level and in 1999 for Beowulf. Ted Hughes won in 1997 for Tales From Ovid and posthumously again the following year in 1998 for Birthday Letters.

· The Costa Book Awards, formerly the Whitbread Book Awards, were established in 1971 to encourage, promote and celebrate the best contemporary British writing.

· The total prize fund for the Costa Book Awards – including the Costa Short Story Award – stands at £60,000.

· The overall Costa Book of the Year is selected from the five category Award winners with the winner receiving a further £30,000.

· The 2015 Costa Book of the Year was The Lie Tree by Francis Hardinge (Macmillan Children’s Books).

With over 2,000 coffee shops in the UK and more than 1,280 in 30 overseas markets, Costa is the fastest growing coffee shop business in the UK.  Founded in London by Italian brothers Sergio and Bruno Costa in 1971, Costa has become the UK’s favourite coffee shop chain and diversified into both the at-home and gourmet self-serve markets.

Costa is committed to tackling the UK’s literacy challenge and is proud to be a signatory of the Vision for Literacy Business Pledge which started in 2016. In continuation of this commitment, and inspired by the Costa Book Awards and the ongoing work of the Costa Foundation, Costa launched its annual Reading Week in September 2016 in conjunction with over 500 schools across the UK.