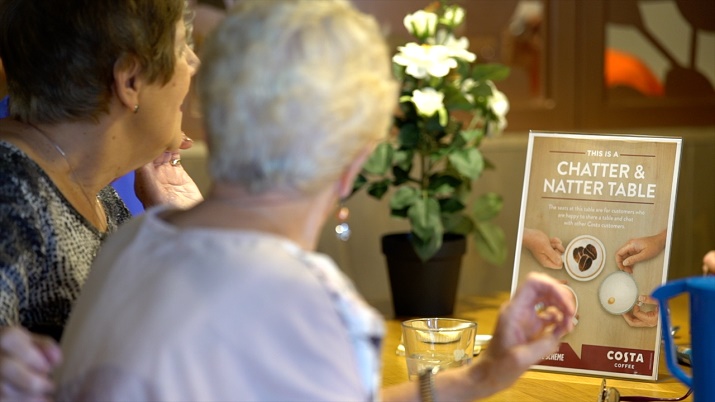 The nation’s favourite coffee shop, Costa Coffee has announced the national roll-out of the Chatty Café scheme; an initiative designed to encourage conversations between customers at designated ‘Chatter and Natter’ tables in-store, across over 300 branches nationwide.

Following a successful trial earlier this year, the national launch comes as new research reveals we’re having less conversation as a nation, with six in ten (59%) having fewer face-to-face chats compared to ten years ago.

Originally founded in Manchester, by Alexandra Hoskyn, the scheme was created to connect people from all walks of life who want to meet new faces and enjoy new conversations.

Costa Coffee has now become the first and only coffee chain in the UK to adopt the scheme on a national scale.

And it seems we are indeed a nation in need of a natter, as the poll of over 2,500 UK adults conducted by Costa Coffee reveals that nearly half (49%) admit they chat to others on average fewer than six times a day, with four per cent even saying they don’t have any face-to-face conversations a day at all.

The decline of face-to-face conversation is blamed primarily on the rise of digital communication (42%); with the same percentage of respondents claiming it’s much more convenient to talk ‘online’. Nearly two-fifths (37%) believe it’s down to people being too busy to chat.

Despite conversation dwindling across the country, three quarters (75%) say they would like to have more human interaction when it comes to chatting – and rightly so, as a quarter (25%) of those surveyed say talking makes them feel happy, and over one in five (21%) feel more confident after a face-to-face natter.

Although the advantages of discussion are clear, it appears our anxieties are holding us back from interacting with each other more. Nearly two thirds (63%) say they would be hesitant to chat to someone they don’t know, with the fear of rejection as respondents think other might not want to talk to them (34%) and nerves (28%) being the main reasons that we ‘keep ourselves to ourselves’.

However, when we do find the confidence to start up chatter with new acquaintances; discussing the ‘weather’ (48%) appears to be the most popular conversation-starter – perhaps unsurprising as we continue to experience one of the hottest summers on record in Britain.

Victoria Moorhouse, head of sustainability at Costa Coffee comments: “It is clear from our research that although we appear to be talking less as a nation, there’s a real desire for people to actually have more face-to-face conversations around the country.

“Our coffee shops have always played an important role within communities; acting as a hub for people to meet, spend time together and most importantly, talk. With loneliness and social isolation on the rise, feeling part of a community is more important than ever.

“And that’s exactly what the Chatty Café scheme is all about – we understand the importance of conversation and we want to help make it as simple as possible for our customers to open up, have a friendly chat and bring local people together within our stores.

To join the conversation, look out for dedicated “Chatter & Natter” tables at your local Costa Coffee branch from Tuesday 7th August. For further information visit https://thechattycafescheme.co.uk/find-your-nearest-table/

The Top 10 Conversation-Starters in the UK:

The research was conducted by Censuswide. The research surveyed 2,507 UK adults aged 16+ from 23.07.2018 to 24.07.2018. Censuswide abides by and employs members of the Market Research Society which is based on the ESOMAR principles.

About the Chatty Café Scheme

Chatty Café was founded in Manchester by Alexandra Hoskyn – inspired by a visit to a supermarket café with her four-month-old son. Alexandra comments:

“He wasn’t great company and I was feeling fed up. I looked round the café and saw an elderly lady who looked just as down as me, and a young guy with severe additional needs with his support worker. I started to think about the positive impact we could all have on each other if we could all have a chat”.

Costa Coffee have been running Chatty Café for a year with the 25th store to adopt the scheme being Southwater Square branch, located in Telford.  Its success regionally, has led to a national implementation of the scheme across over 300 of Costa Coffee’s stores.

Costa Coffee is part of Whitbread PLC, ranked no. 8 in the Sunday Times Best Big Companies to Work For list and employs around 50,000 people in over 2,300 outlets across the UK, serving over 28 million customers every month.

At Costa Coffee we are committed to being a force for good in the communities in which we operate. Our Sustainability programme, ‘Force for Good’ is focused on enabling people to live and work well and is built around three pillars of Opportunity, Community and Responsibility.

Chatty Cafe is just one part of the work Whitbread teams do in the local community as part of the wider Force for Good programme. Team members are encouraged to donate their time to and space in store to support local organisations and causes to support their local communities – doing everything from litter picking to hosting community groups in stores after hours.